I am Dr. Laszlo Felfoldi, department leader of the Institute for Musicology of the Hungarian Academy of Sciences in Budapest, leader of the BA and MA course on dance anthropology in Szeged University and chair of the Study Group on Ethnochoreology of the International Council for Traditional Music. During the last years I gathered several positive impressions on the extensive and multifaceted activities of this Society. 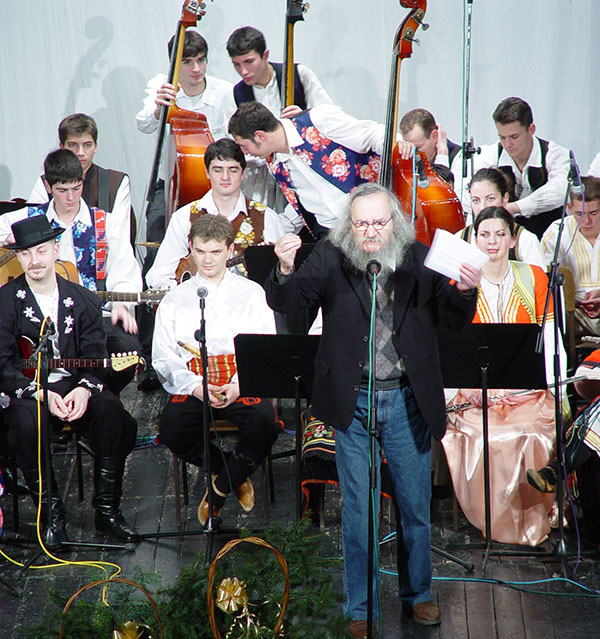 GUSLE is one of the best organised and most successful institution in the field of musical education, ethnomusicological research and artistic presentation of folk music/folk dance in their region. Their systematic scientific research resulted in a rich collection about the traditional culture of the Serbs and other ethnic groups living in North-East Serbie. Their scientific work is closely connected with the education of youth on different levels from elementary till higher education. Ethnocamp - summer educational and research program with the participation of students from Novi Sad, Beograd, Banja Luka and Szeged universities is the most exemplary and effective form for developing international co-operation in this field. Their artistic presentations by the several music and dance ensembles/groups maintained by GUSLE, based on their research and education, represents a very high standard in staged folk dance and folk music genre.

Through their wide international connections, they co-operate with numerous European countries, which manifests their professional strength and capacity.

On the basis of the above listed merits I warmly recommend the financial and intellectual support for the further-development of their activities.

Somewhere deep in the past centuries on the well of mankind dance and song had begun. People sang and danced in every occasion, especially when they used to work or celebrate...

Songs and dances came out in the moment when they conceived in someones soul, later on they continued their exciting life traveling from throat to throat, step by step, from heart to heart...

They had transformed slowly, came through many phases... and finally got perfect shape full of very essence with noble emotion of people where they got started. It had been happened for days, years and centuries. They had been kept and charished with passion.

We preserve and cherish them, too. Longer than a century. No break, with devotion, like a parent who take care of the most precious...the most important, what is part of our life forever. We gave them the colour of our spirit and strenght of our youth.

That very begining was in 1876 when GUSLE was born and came out on the base of friendship between doctor Jovan Pacu and great intelectual Milan Petrovic. From that time till now GUSLE gave great contribution to the national culture due to numerous hard working members, intelectuals and leaders. List of their names is very long and our duty today is to point out their contribution in the history of the Society.

But let us remember and mention some of them who played the most important role in this noble cultural mission.

From the very begining of the foundation GUSLE had not only important cultural mission, but had raised the national awareness among Serbs, too! GUSLE is one of the oldest societies in the field of Serbian culture, never changing the title and identity. In 1924 a decission had been made: activity of the Society would never depend on political circumstances in order to preserve the integrity and independence. Society ever since continually has kept pace with the high standards of national culture, even during the wars. During the First and Second World War activitity of the Society was forbidden, but memebers used to gathered in Orthodox church and sang at liturgy. Later on, in the period when we were imposed on sanctions and bombing campaing in 1999 many programmes and concerts were organised.

During the decades Society has changed its structure, raised and strenghtened.

GUSLE gave performances and concerts all around the country and abroad, too. In more than 400 towns- even in the most presticious concert halls of Europe, Asia and the United States of America.

Orthodox local community gave huge support to the Society and its misssion was highly respected and recognised.

Nowadays local municipality supports GUSLE strongly. Many cultural and scientific institutions gave all kind of help and support, too.

Longlasting work and devotion to music tradition gave the best results and GUSLE was given many awards:

I want to thank to all the people who gathered tonight to enjoy this special day for the Society: You truly have recognized values worth to support.

We are very proud of our young people full of energy, devotion and love for music and dance. They truly make us happy! They have power to take away any sorrow and bring us everlasting smile and happyness. So, I believe this evening they will give us full enjoyment and satisfaction.

Now, open your soul and enjoy their skill and talent!