One of the youngest town in the region of Banat, Great Kikinda was mostly inhabited by Serbs, where minorities were Germans, Hungarians and Jews.As the capital of the District from 1774-1876. Great Kikinda had connection with the world by railway and telephone.

During the period of fast economic growth in Great Kikinda strenghtened cultural circle of Jovan Paču, accompanied by dr Milan Petrović, Djordje Vlahović, Djoka Radak, dr Živko Bogdan and others, who supported and established singing society Gusle. Jovan Paču gave an initiative for establishing first mens choir in 1873. which would be supplemented by women voices, and finally founded as singing society GUSLE.

Struggle with the Hungarian autorities to officially register the Society lasted almost two years, but unfortunately the Act of foundation was not preserved in the archive. The oldest archive documents were vanished and destroyed during the First World War. On the 50th anniversary GUSLE published Declaration which was written only on the basis of memory contributed by the oldest members.

The first performance, singing society GUSLE, gave on February 14th 1876. Conductor was N. Fris who moved from Subotica to Kikinda. In 1877. Society was given official name “GUSLE, Society for cherishing music”. Founder and the first president was attorney, Milan Petrovic Tuturov, 1844-1903. Society existed in very hard conditions, but spirit of the members was good and high, so they used to gathered on rehearsal bringing even candles and wood to heat the space to enable full activity of the Society. After Fris, very soon conductor of the choir became Josif Marinković, and from that moment Society made great progress, with mixed choir and section for instrumental music. Robert Tolinger replaced Josif Marinković and became conductor in 1880. 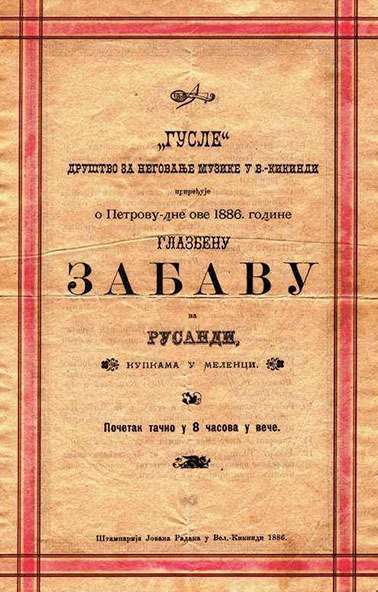 He was a briliant musician of the superb qualities and musical education, so he gave his best to improve the position of the Society in the world of music. During ten years Tolinger composed a lot of pieces for mens choir, mixed choir and solo singing. Pieces were printed in Wienna and then represented a huge contribution to Serbian musical culture. It is of the highest importance that we nowadays have preserved most of his work in the archive of the Society. It is very important to mention that Tolinger and Milan Petrović established –GUDALO- the first musical review in Serbia. After ten years of very successful and profilic work, Tolinger moved from Kikinda, and due to Dvoržak recommendation new GUSLE conductor became Hranislav Hartl. After Hartl on this important place came Matias Melihar, and then Franta Bah. During that period of time Society, besides regular rehearsals, gave many performances taking part in the church solemn, too. In 1926 Society celebrated 50th anniversary under the leadership of local priest, the flag of the Society was dedicated, and it is saved for new generations. Nowadays, GUSLE flag is still kept in the space of the church community. Society fought to improve financial status, but also succeeded to prepare and carry out celebration performance in 1930 when many local singing societies took part in it. Next evening GUSLE gave big celebration concert in the luxury hall of National hotel when many guests came. It is important to point out that Radio Belgrade broadcasted this concert and that was their first live broadcasting at all. In 1930 GUSLE published Declaration, which, although small, gave huge contribution in styding historical development of the Society. In the first 50 years of existence Society cherished the tradition of choir singing and instrumental music, taking part in cultural performances of the Serbs. Society published many compositions and so gave huge contribution to Serbian musical culture of that time. GUSLE gave initiative for foundation, and became a member of Yugoslav choir societies union. 1938 was very hard year for the Society, because they had many financial, personnel and program troubles. So Society directed its activity organizing dancing performancies in the neighbouring villages. This kind of program- vocal or instrumental- was short and simple and it was easier and much cheaper to prepare and organize it. Dancing performancies attracted people very much.

During the Nazi German occupation In Kikinda, there were no conditions for public performancies of the Society. So, they used to gather and sang in the church on Sunday or on religious holidays. First days after liberation gave them opportunity for stronger activity. GUSLE strongly supported and took part in all manifestations and meetings. On the 1st of March 1946 Syndicate Municipal Council became official protector of the Society, and change its name –“GUSLE-Syndicate Cultural and Artistic Society”. After 70 years Society was given opportunity to widen field of activity, so besides choir established two sections for -drama and folklore. Drama section very soon made foundation for establishing National theatre in Kikinda . In that period of time Vukašin Bojić was conductor of GUSLE`s choir since 1963, in charge of folklore was Sredoje Popov, and Sava Pavlović led drama section.

From the beginning of foundation GUSLE has been searching adequate space for activity and work. Moving from one place to another made position of the Society hard, because it was unpleasant to work in cold and dark halls. Financial position of the Society was very serious, too. When GUSLE celebrated 100 years of persistence, finally appeared better and sustainable solution for space. Better financial status of the Society made conditions for improving quality of work at all.

GUSLE moved to the building of CURIA (Kurija) in 1978. From that moment till now hard efforts has been done to reconstruct the space and adapt it to the activity of the Society. Nowadays GUSLE has adequate place for work. It is important to point out that it would not be possible without real and big support of local Municipality. 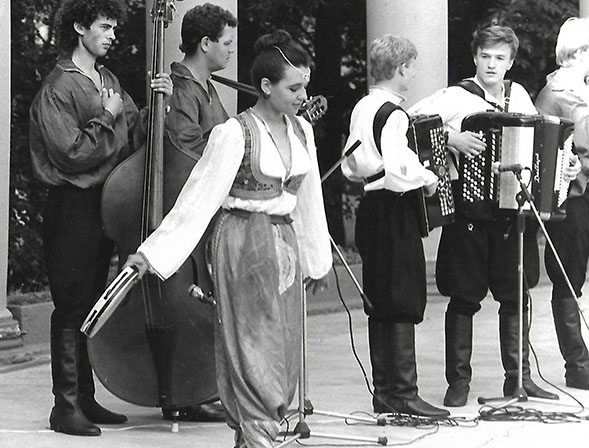 After 1990. GUSLE produced in cooperation with National Broadcasting Service many documentary movies- Revena in Kikinda, Fir tree in Kikinda, Fires-Lazarice (skipping fire in period of Easter), and so on. They took part in production of many broadcasts for Radio Kikinda, Radio Novi Sad and Radio Belgrade. Huge contribution in this work gave Dušan Dejanac, famous writer and historian. Dejanac spent most of his life work in the Society and gave many successful initiatives. He permanently has been searching the history and record many valuable facts that enable us to reconstruct long and fertile persistence of the Society.

GUSLE was given many valuable awards-Decoration of Saint Sava –during the period of Kingdom SHS (Serbs-Croatians-Slovenians), Serbia Cultural and Education Award and Award given for 100 years of persistence given by –Spark of culture, for improving music and folklore in 1976, then –“VUK AWARD”- for exquisite contribution to the national culture. In 1986. GUSLE was given the Charter of Captain MIsa Anastasijevic for preserving and improving tradition and culture in 2006 and 2016, and KIkinda Annual Award in 2016.

Big GUSLE orchestra was founded in 1993-1994 and since that time has led by Zoran Petrović. Strings orchestra at first was in charge of Vladimir Krstonošić, and after that Živica Grastić took it over. Petrović share his great and long music experience with enormous members of the Society orchestra and his talent and knowledge, inspired by genious musical ideas put Gusle on the top of music creativity. So, Petrović started a new epoch in the history of the Society. He created entirely new programme of work representing various tradition of folk music in Serbia and the Balcans. With authentic sence he found simultaneous link between choreographies and music, and gave huge contribution to preserve old archaic sound of each part of the country. Singing groups in that period of time were led by-Igor Popov, Zoran Petrović, Magdalena Popov. Choir conductors were-Tatjana Ivanica, Eva Aranjoš Francuski, and Snežana Kovačević. For a long period of time exclusively old source group –Bagpiper and bachelors- led by Branislav Zarić, was a part of the Society, and cherished old music. Igor Popov inherited Zarić playing bagpipe.

At the beginning of the 1970 Society sent many members to folk seminars to improve their personal qualities and knowledge, to enable improvement cooperate with many music experts, other Societies, and took part in music festivals. In December 2006 GUSLE celebrated 130 years of work and persistence and performed big concert. Ten years later, in 2016 GUSLE celebrated 140 years of successful work and devoted big concert to national audience and funs. On that occasion many awards were given to the outstanding contribution and results in cherishing valuable music tradition.

Management, talents and sections:
Through the history of the Society leaders and managers were respectful intellectuals fully dedicated to the mission which Society has defined since the moment of foundation. So it is today. Chairman of GUSLE assembly is phD Spasoje Grahovac, university professor, and phD Milanka Maljkovic is in charge of the Executive board.

Besides mentioned sections Society has Scientific and research board which gathered many famous experts for ethnomusicology and ethnochoreology.
It is important to point out and mention Workshop for renewing costumes which results are impressive and superb especially in reconstruction old costumes and scenery. Society has Club of funs, too.